Welcome to the Jungle !

It was time to loose some altitude so we headed back to sea level..... well..... jungle level anyway since Bolivia no longer has access to their sea !

30 °C
View Around the World on Taffski's travel map. 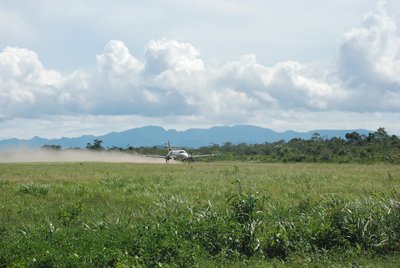 We arrived early in the airport (stupid fools that we were) and waited for our flight to Rurrenbaque..... a small town in the Amazon Basin one hour (by plane) North of La Paz.

We boarded our flight and were in the process of getting our safety instructions.... when.... the pilot informed us that we had to leave the plane as there was rain in the jungle.... and we couldn´t land the plane... so we had to wait !

We went back into the airport and had another coffee as we waited for any news.

We flew with a small company called Amazonas (who have small aircraft too.... 19 seater jets where you can see out of the pilots window if you´re cloase enough to the front.... no terrorism here !!!!)

We were now flying into another airport .... Reyes.... some 45 miles to the North of Rurre.

Ok.... beggers can´t be choosers and we were told there would be a transfer bus waiting for us to take us into Rurre when we arrived.

The flight was nice and the views of the Mountains, rising and then suddenly descending into a lush green rain forest below with winding rivers all over, were fantastic.

Unfortunately... the windows of the plane were scratched to feck.... so no photo opportunities!

We could however watch through the pilots window as we started to descend into the Jungle..... Literally !

All I could see was trees.... more trees.... and we were heading right for these trees !!

Where the feck was the runway ???

As we got closer to the trees (we could now see the birds perched in their top branches !)

I was starting to worry a bit !

However, suddenly from within all this vegetation... a dusty track appeared... people were scattering across the "runway" as we got a little closer

(we reckon it must have been a short cut for the locals or something!)

We bumped down suddenly (narrowly missing a few "slower" locals) on the dirt and the brakes were applied!!

however we were alive and in the jungle !

They opened the door and were greated with our first (of many) gasps of Hot, Humid, sticky Air.

Definately different from La Paz that´s for sure!

We got out at some small little building and watched as the pilots unloaded the plane and then reloaded it for the departing flight... no waiting around here ! 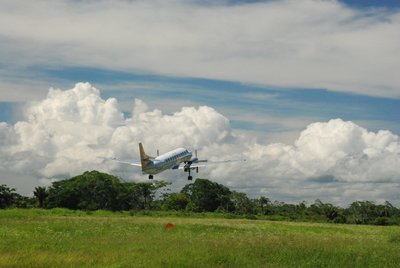 The airplane took off again and we were left (alone) on the side of the runway...

in a small shack of a building...

welcome to Bolivia I kept reminding myself!

It´ll just be a bit delayed I thought.

There were no representatives of the airline in this shack and we were stood with 5 other gringos.. wondering if there actually was a bus.... whether we were actually in Reyes (Bolivia still for that matter!) or whether we´d just been flown in as replaments for some other unfortunate gringos whose ordeal as hostages would finally be over.... It was our shift ! 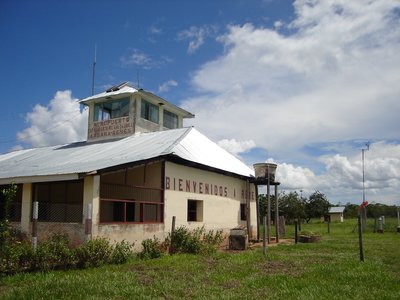 After an hour or so.... Remember.... this is Bolivia.... a rickety old chicken bus rambled down the dusty track towards us....

it was heading to Rurre and we all jumped on !

An hour later and minus my eye balls... they´d been wrenched out of their sockets by some rather well placed and what seemed some lackluster attempts at trying to avoid them by our driver (who was all of 16)....

Welcome to the Jungle !

The town itself was small and rather sleepy in nature.

We grabbed our "new" Lonely planet for Bolivia and looked up where to stay...

We stayed there that night as it was getting late and even though downstairs the Karaoke was thumping till 6 am.... we all slept like babies that night.....

Welcome back to sea Level !!!

We walked around and finally found an oasis in the Jungle Town...

Hotel Santa Ana was literally two blocks away from the centre of town.... however, it was light years ahead of the other "accomodation options as recommended in our "New" Lonely Planet Guide book" (this was something that would reoccur many times here in Bolivia !!!)

Anyway, We got a double room with En Suite... Kieran got a nice single room.... they were clean.... had clean sheets... the bathrooms were clean... there were hammocks loosely arranged around the entire hostel !!! What a great place and we immediately booked in for 2 nights!

Ok.... we put on our glad rags and headed into town for the New Years Partying!

We opted for the gringo bar and headed to the Mosquito bar.

Cocktails and booze was consumed in equal measures and before long we decided to head to the Monkey bar (another gringo haunt) as there seemed to be more people there. 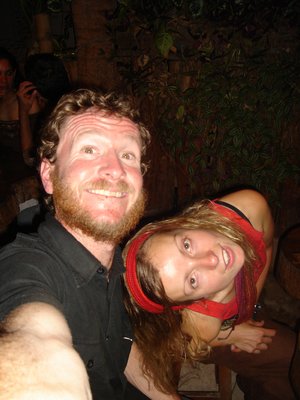 Having dodged a few of our own personal firework displays (as put on by the local kids who seemed to revel in throwing firecrackers at the gringos) we made it to the relative safety of the Mosquito bar.

Here we settled in for the night and ordered a bottle of Champagne.... it was Hogmanay after all !!!

This almost broke the bank at 100 Bolivianos (7 pounds sterling !)

I was going to enjoy my stay in Bolivia.... I could definately say that !

We were handed our some grain by the owner of the bar.... this was a local tradition in Bolivia where at the start of the New Year you were to throw the grain up in the air to ask for a good harvest year to come.... well why not !??

Balloons were dropped from a big bag above us... the Champagne cork was duely popped and I managed to soak nearly everyone else (or so it seemed)... we were all jumping around and wishing everyone happy New Year.... and then sparklers were handed out (where as .... like we were all 5 years old again... we proceeded to right our names in the air using our new found fireworks 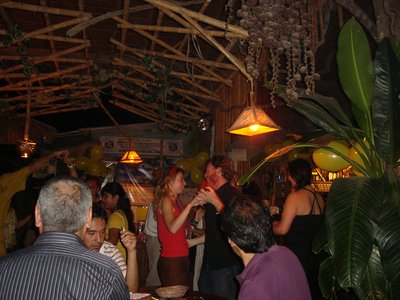 We´ve travelled to 4 continents... sailed between 2 of them.... visited some of the most pristine and special places on the planet, seen some fantastic Wildlife

One of the most important decisions we´ve made... and I wouldn´t change it for the world !

The consensus in PTSB is that that is an impressive beard, in a Leprechaun sort of a way