27 °C
View Around the World on Taffski's travel map. 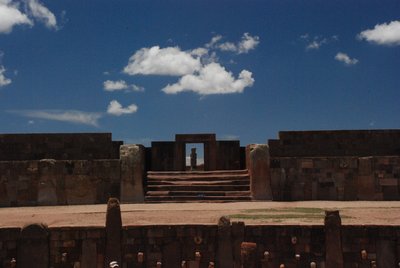 We´d arranged to go and see the Tiwanaku (or Tiahuanaco) ruins as part of a day trip as it was only 35 Bolivianos for the full day trip with an English Guide (that works out about 3 pounds each !)

It was an 8am start (which wasn´t too bad) and by 9am (Bolivian Time remember !!!) we were heading off towards the ruins.

The People tht originally occupied the site were reckoned to have been there about 600BC, however, it´s not too clear what happened to them before the Ayamara and then the Inca Peoples decided to populate the site.

The Temple itself was added to around 700AD, before a "natural Phenomenon" (aka El Nino and an Large Tidal wave.... so they reckon from Titikaka) wiped the site out in what they reckon was about 1200AD (how they knew this I´ll never know !!!)

Anyway, the reason they can tell that it was definately impacted by something was that most of the monuments that stood upright were laid flat, however, they were quite a few meters away from where they were supposed to be as if they´d been lifted up and washed some way down stream .... so to speak.

The whole site was covered by silt and mud and so most of the formations and statues (although the Gold and relics etc. were pillaged by the Spanish and some religious zelots.... makes a change eh ???? !) were left relatively intact and in their final resting place (until we found them that was and put them back wher we thought they were!)

We pulled up to the site some 2 hours later where we found two museums side by side. We payed our entrance fee to our guide (who reliably informed us he´d buy the tickets) and went in.

The first was the most interesting with lots of pots and atrifacts from the site (those that remained) whilst in the second there seemed to be only one thing.... a massive megalith of Pacha Mama !

It was a great statue and used to be situated in the middle of La Paz, before it was returned to the Museum and even had a few gun shot marks on it from various revolutions!

The strange thing though, yet another annoying thing about Museums down here, was that we weren´t allowed to take photgraphs of it!

Not because it damaged the monolith or anything so logical, but again, because it´s copyright was to be maintained by the museum...... far be it that tourists would take their photgraphs around the world and publicise the little known artefact....

"we can sell postcards"

of the site if tourists aren´t allowed to take pictures !!!!!

Anyway, it´s a cool monolith and I´d love to be able to attach a picture of it to show you......!

One of the interesting facts was that the site itself used to be right alongside the shoreline of Lake Titikaka some 3000 years earlier and now the Lake itself was some 4 kilometres away !!! 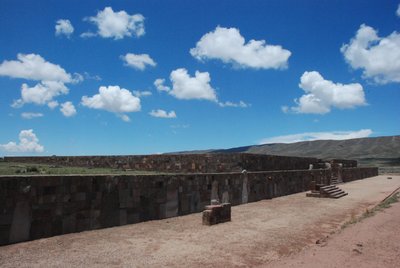 We were led around the Akapana Pyramid, which consisted of seven distinct levels up to the top level (where we were assured lay the remains of a pool where it was reckoned water was used to reflect the stars in the sky by the Incas)

Unfortunately.... much again like many sites in South America.... we couldn´t go walk up to go and see this pool as the Guide had a plan and we were encouraged to follow him to the next site.... The Temple Subterranio!

Before we got there though we were given a good bit of information as in the Lower corner of the Akapana Pyramid a Jaguar Skull and entire skeleton had recently been discovered.

The Skeleton was found in one of the Irrigration tunnels on the side of the building as if the Animal had been trying to hide, or something, in the hole to try and survive whatever the terrible disaster was that did, unfortunately, kill it!

Very interesting indeed we thought as this indicated either the animal was tame or that they roamed around the temples !!!

Also it reaffirmed the idea that a natural disaster took place at the site some years earlier. 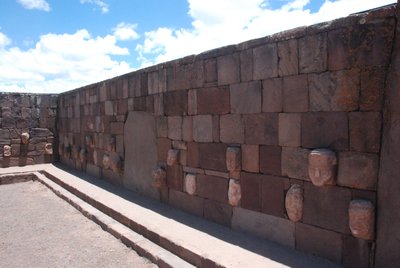 The Subterranian Temple hadn´t been dscovered by anyone prior to it´s excavation.

Hence the Religious zealots hadn´t had a chance to damage and destroy the Human faces that encircled a great statue of Viracocha..... one of the Original and most interesting of the Inca Gods (well.... ???)

An interesting fact about the heads that adorn the entire outer walls of the temple is that they are all of different "looking" peoples ! Honest.... some white, some black, some red.... large lips, small thin lips, one type of hat, a different type of Nose etc. etc.

And every one was different !

As if to indicate that either the original peoples of the site were a hotch potch of peoples from around the world or the people that were there were aware of these different looking people.... cool ! 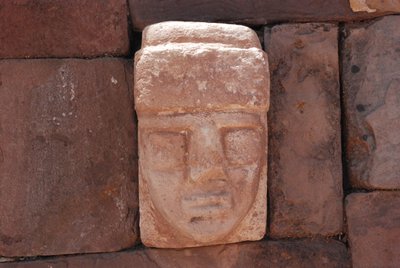 The Statue of Viracocha was of a white man (yep..... white) and he has a clearly visible beard on the statue (which was said to be Red !) The Stone is red, however, they reckoned it was painted white... well his face was originally anyway? 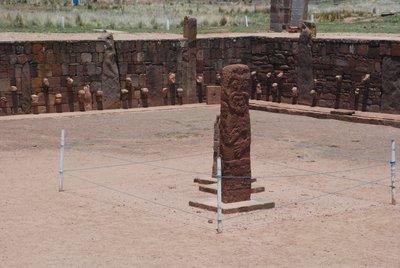 So.... once again....... somewhere else in the world.... a God Turned up some 3000 years ago.... cultured the local population and the guy was white, had a beard and once again... dissappeared on a "boat" only to return again before another Natural disaster happens !!!

Anyway, We were then shown the Kalasasaya (where Evo Morales was Inaugarated) and the sun gate through which the Rising sun can be seen on the Summer Solstice.

Then we walked over to the far side of the site where we were allowed to view the Sun gate for a few minutes.

This was one of the monuments that was thought to have been horizontal on the main site, however, had been washed downstream some distance (and broken in two I might add!) by whatever "natural" disaster had happened some years earlier. The Archaeologists had relocated the monument to where they thought it was located.... however.... to me it looked out of place where they´d put it! 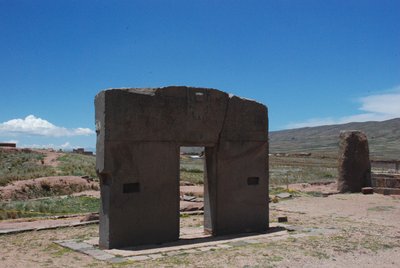 It was then that we were invited to go to a touristic restaurant for lunch.

We declined and headed off to Puma Punka ! (We´d made sandwiches already as we´re getting used to this side of the tours by now !!!) 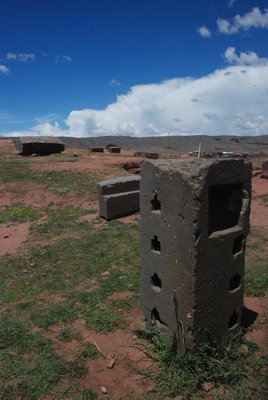 I´d read up about Puma Punka earlier and had wanted to specifically detour to see the smaller site on the South West of the main site.

The rock formations and sculptures were said to be very different from those at the main site and we weren´t dissapointed.

There are hundreds of broken rocks and sculptures at the smaller site, however, they all seem very different and the shapes, patterns and geometrical shapes on them all are very different indeed. 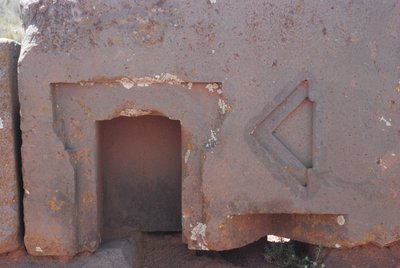 On the large rocks on the floor seemed to be indentations ready to "plug" in other rocks with which they would build the temples or walls or whatever.... it was really fascinating. Also there were other rocks with small holes running along them where the wholes were exactly equidistant from one another !! Again.... different and cool !

Not to mention the Doorways, Triangles and other assorted shapes littered around the site !

Anyway, we hung around the site waiting for our bus back and (in True Bolivian fashion) the bus turned up some 20 minutes late ready to take us back to La Paz.

Which he finally did !) and then we headed back to the hotel ready to catch our flights to the Jungle the following day !

Well, it certainly looks as if you're having a brilliant time, and as I sit writing this in my office, I'm well jealous!! Hope your both well? and that you're not drinking the Peruvian bars dry!! I'll be keeping a close eye on the blog - very interesting reading! Take care.
I'll see you when I see you then...! Geth, Nia a Aron x