Who what where when and why ??

10 °C
View Around the World on Taffski's travel map. 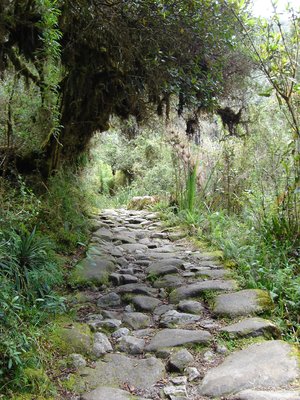 We´d spent roughly four days waiting for our Inca trail passes to be processed, the time being well spent (Steph thought) shopping for xmas presents amongst the numerous Shops and market stalls scattered all over Cusco.

We´d Decided to go with Pumas Trek Peru in the end.....

Kind of difficult that one. More to do with them being accredited and on the cheaper scale for the trek than anything else.

I´ve written a full inca trail review here on the travellerspoint website regarding agent selection etc. so I won´t go into the specifics (but should you wish to read it here´s the link to the Wiki Travel Guide.... most of which is the same as the post)

We had a curry in the Indian restaurant in Cusco the night before we left (which was marvellous) and then after a cheeky in the KMzero bar by the hostel... packed our bags for the next 4 days of walking!

We awoke at 4am and even managed to get a coffee from the Night watchman at the hostel.

5am and we walked down to the San Blas square where we were told we´d be picked up by the tour agency. It was daylight already so it was no problems and we happened to bump into clare (an American Lady who was also on our trip and also at our hostel) as we walked to the square.

Our "pickup" consisted of the tour agency secretary walking up the hill and telling us we had to walk down the hill to Plaza San Francisco.... no problem, however, the first thing that differed from what we were told.

If we´d been told to go to Plaza san francisco.... no problems... we´d have walked down the hill ourselves... without our accompanying body guard.... however....

I won´t bother explaining why this was seen as a bad thing by Steph and I, however, if you´ve read our earlier entries in south America or ever backpacked down here you'll know what we mean

anyway... our opinions turned out to be totally wrong which was nice!!!

Another one for the "forming an opinion of someone all too quickly !!!" Almenac.

Clare managed to forget her passport (the original copy) and so we hung around for another 15 minutes while she caught a taxi... for which she payed herself to go back to the hostel and then back down to Plaza SanFrancisco.

Finally we were all on the bus, our porters included, and we trundled off towards Ollantaytambo... some 2 hours away!

Here, as per usual, we were treated to a 20 minute "refreshment stop" where we were informed that the purchasing of a Locally made walking stick was "necessary" or at least were invited to purchase something from the numerous stalls and hawkers milling around the plaza.

Steph and I did our usual and hid in the corner coffee shop and began chatting with the owner who turned out to be very interesting and at the ripe old age of 70 had decided to emigrate to Peru to help the local people and open a coffee shop....

Anyway, Steph topped her Chocolate supplies up and we then headed off in the bus once again towards Km 82 (where we were due to start walking!)

Once again we were greeted by a hord of locals selling "necessary" hiking sticks.

And I mean really pretty poor... especially his pronounciation.... This was something he and I could work on for the next 4 days I thought, however, a grade B guide he was not! another little "white lie" surfaces I thought.

There was going to be quite a few of these "little white Lies" it would turn out!

We hoped this wouldn´t affect the commentary we´d been promised at each of the Archaelogical sites ?

Jackie was 58, Australian (or English Origin), was travelling around the world on her own and a lady..... well.... lets just say with a mind of her own

I´m sure she won´t mind me saying that 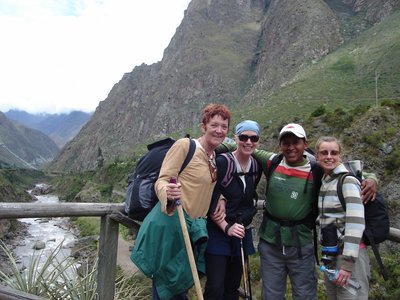 As we started the walk a guy holding an Antique camera rushed in front of us..... I was quite intrigued as to his camera as it was definately something from the dark ages that surprisingly seemed still to be working !

We´d find out the results and his reasoning in four days time !!

It was an easy start to the trail.

We were all chatting away and Hernan was trying to explain some of the upcoming highlights (which I have to say Clare and Jackie tended to ignore and this wound me up a bit!... OK the guy wasn´t brilliant at English.... but that didn´t mean he was stupid! Steph and I listened and tried to decipher what we could!)

The trail rolled alongside the river for the first few Kms and after a couple of hours we stopped for lunch.

Now.... this was another area where "you get what you pay for" once again turns out to be OH so true !!!!

We sat under some trees and waited.

We were first to the Lunch "site", however, we sat around.

Other groups passed us and went for their lunch, however, we had to wait.

The rest of the people (8 Isrealis a Brazilian and a Korean) also with Pumas Trek Peru (with a different guide though) arrived....

our porters carrying all their gear rushed past.....

The Tent was hastily erected in the middle of a field, the cooks started cutting carrots and the kettle was put on!

We were all invited to sit in the flimsy and hastily erected tent.... ALL 14 of US !!!! Squashed into the small tent that was now starting to flap around in the increasingly strong wind that was the prelude to an immenant downpour!!!

Steph and I spotted this and huddled under a big tree with a wall for protection.

We sipped our soups under the cover of the tree (which was surprisingly good and keeping us dry) as the other 12 struggled to keep dry as the tent flapped around.

Soup was spilt, Coca tea was dropped and Spaghetti was splashed as the guys in the tent attempted to eat whilst holding down the edge of the tent.....

Clare and Jackie soon joined us and soon after the Porters were left to tidy up the camp site as we were behind schedule now and needed to catch up (or so our guides informed us!!!)

With Bin Bags and ruck sack covers wrapped around our bags and an assortment of rain Macs, Tarpaulins, Ponchos and once again bin Bags wrapped around both ourselves and the porters we trudged in the mud and rain along the remainder of the track. 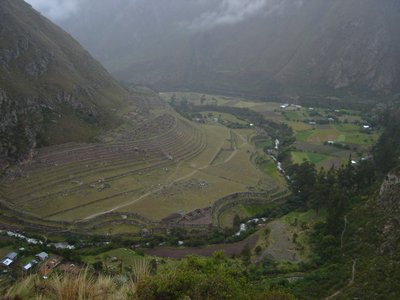 We did pass by the Llaqtapata ruins as we walked though. It was far below us and we didn´t get to visit the site, however, even in the dismal conditions the site nonetheless looked impressive as we surveyed it from high.

We camped that night at Wyllabamba.... 3000 metres above sea level.

It was a nice little camp site and by the time we arrived the poor porters had rushed up ahead of us and set up the tents etc.

Steph and I had one, and Jackie and Clare had one.

We had afternoon tea (coca tea and Popcorn) and chatted to the Israelis and the Brazilian and Korean. however, this time it wasn´t under a tent but rather under a more permanent structure with a roof and seats etc...... Oh the Luxury !!! 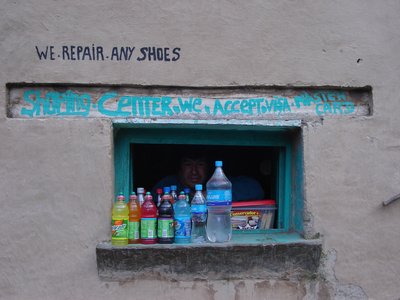 The camp was in a small village next to the Wyllabamba archaelogical site and since it had stopped raining by now, Steph and I dropped our stuff and walked around the site.

Upon our return it was tea time.

Before we ate we witnessed a little ceremony and song by the Israeli Guys and Gals as it was Hanukkah.

They´d even brought with them a little candle holder and candles, so we were witness (my first time i have to say) to a little bit of Religion whilst on the Inca Trail.

The Israelis were nice enough to explain the reasoning behind the festival to us "Non-believers" and it was generally a nice evening all in all.

After a cup of coca tea we all headed off to our pits.... however..... the weather had cleared and we were all rewarded for our initial days efforts by a beautiful star lit sky.